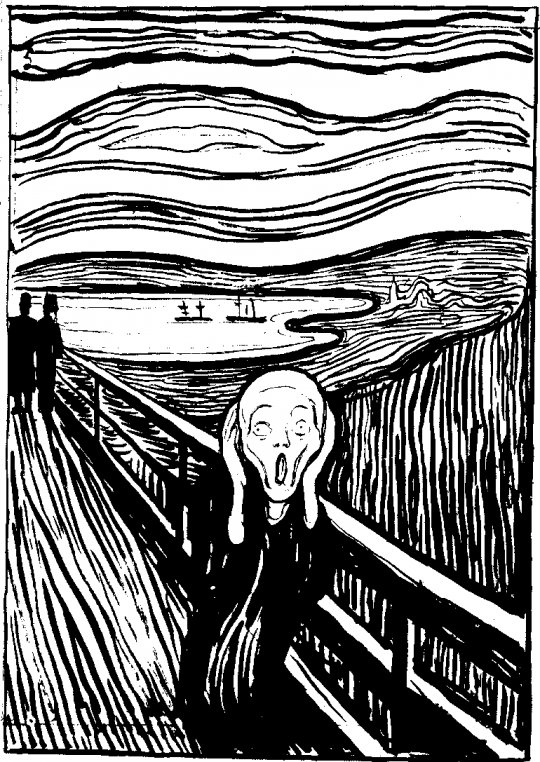 We have seen what we can do, and it is awesome. In just a few millennia, humanity has emerged as a global force of nature – a networked system of billions of individuals creating and sustaining an entirely new global ecology.
Erle Ellis, The Planet of No Return

The wound can only be healed by the spear that made it.
Richard Wagner, Parcifal

“I was walking along a path with two friends – the sun was setting – suddenly the sky turned blood red – I paused, feeling exhausted, and leaned on the fence – there was blood and tongues of fire above the blue-black fjord and the city – my friends walked on, and I stood there trembling with anxiety – and I sensed an infinite scream passing through nature.” Edvard Munch, 1892

The Scream of Nature, one of the most iconic works of modern art, depicts a figure caught in a moment of anguish, despair or anxiety. The figure is protecting his ears from an unknown deafening sound, a shriek, while two figures in the background seem blissfully unaware of what is happening, what the man is feeling. It's said that the eerie, lurid red sky in the painting could be the artist's recollection of an unusual twilight, related to an event ten years earlier and 10,000 km away on the island of present-day Indonesia. It looks as if the lunatic in the painting can hear a torturous vibration of air.

Broad and low down, where late the sun had been
A wealth of orange-gold was thickly shed,
Fading above into a field of green,
Like apples ere they ripen into red,
Then to the height a variable hue
Of rose and pink and crimson freak’d with blue,
And olive-border’d clouds o’er lilac led. (st. 25)

from Robert Bridges Eros and Psyche (1885)

The blast of the famous Krakatoa eruption on August 26, 1883, was audible 4500 km away on the shores of Australia, but not in Oslo. It caused tsunamis that swept through waters as far away as the English Channel. Settlements on the shores of the Indian Ocean were swept away by tidal waves, and rafts of volcanic pumice created by the explosion were found drifting up the coast of Africa up to a year later. The wave of pressure generated by the colossal explosion propagated at a speed of 1086  km/h. It was so powerful that it ruptured the eardrums of sailors on ships in the Sunda Strait more than 60 km away. The sky turned dark for days with ash and debris that circled the Earth after the eruption. The particles spread north and south over both hemispheres and lowered the average global temperature by 1.2 degrees for the next five years.

Still, the Krakatoa explosion was ten times weaker than the eruption of Mount Tambora in 1815, which caused extreme weather conditions for the next three years across the Northern Hemisphere. The Tambora eruption resulted in 1816 being dubbed the Year Without a Summer. In that year the story of Doctor Frankenstein was born in Switzerland, and China, Europe, and North America suffered below-normal temperatures and devastating harvests. The climatic change altered the microbial ecology of the Bay of Bengal, creating conditions that enabled cholera bacterium to mutate into a new strain. The resulting cholera pandemic spread across Asia and eventually the globe, and by the century's end the death toll stood in the tens of millions. Among the indirect ripple effects - so called “teleconnection pattern" - a persistent, large-scale pattern of pressure and circulation anomalies that span vast geographical areas - were many significant historical events: epidemic, production and distribution of opium, the Panic of 1819 in North America and the first attempts to colonise Arctic areas. The paradoxical impact of the volcano was for several years higher temperatures in the Arctic. A remarkable loss of sea ice around Greenland, sparking the campaign in England to chart the elusive Northwest passage.

It's as if this thin, hypersensitive, neurasthenic figure in the Munch painting - the prophet of the dark side of Modernity - is not only frightened by the anomalous color of blood of the sky. It's as if he can also “feel” the echo or reverberations of the cataclysmic ruptures of the past. Perhaps the volcano of Krakatoa, which killed 36,000 people, transmitted 45 cubic kilometres of matter into the atmosphere, and caused the clouds to take on a sinister, lurid red tint above Oslo.

The 20th century is often described as being dominated by the development of technology, nationalism, decolonisation, World Wars, Cold Wars and Post-Cold War conflicts, cultural homogenisation, the escalation of transportation and communications, population growth, a growing awareness of environmental degradation and ecological extinction, among others. How is one to capture these symptoms of transformation, expulsions and displacements, translocations and dislocation? The wrongness which is palpable in the geological stratum? Galvanised not only by Earth volcanic forces of nature but by human-driven technology and the instincts to improve, re-construct, trans-form, dis-locate, dis-rupt and per-forate the land and sea? As if it was not good enough before?

As if we today easily can start to compile an endless index of dis or trans, to expand the recent preocupation with post:-formations, -locations, -mutations, -actions, -versions, -lations, -portations, -figurations, -itions, topic, to get to the other side of, to go beyond, to get across, or to get through.

Such an index might include many things: the “trans-land art” by the engineers and entrepreneurs of the vast lignite open cast mines under the Krušné hory. Their elaborate artistic methods of turning fossilized carbon into money, an abyss into an artificial lake; the technological wonder (or trick) of transporting on wheels the 12 700 tons of the entire gothic Church of the Assumption of the Virgin Mary in the town of Most over a distance of 841 metres, to atone for the disappearance of the entire medieval town of 30,000 inhabitants in order to reach the fossilized carbon deposits beneath. There are too many more analogous translocations: acid rain from the industrial Black Triangle of Central Europe (or Eastern Ukraine), driven by the wind above the lakes of Lapland; the trade in carbon dioxide emissions and freon, the ozone hole as a transformation of the old concept of what we used to call the weather and the economy; oil wells and fracking at depths of 6000 metres as a symptom of the transformation of the planet’s pre-human, diluvial age. Plutonium from Chernobyl hidden in the mushrooms and wild boars of Poland, Spain and Ukraine, or nuclear waste out of the Fukushima power plant swept by a tsunami and washing up a year later on the coast of California, can be seen as transmutations of the modernist concept of the trade and distribution of wares and industrial output. We can think about the melting of the icebergs of Greenland and the glaciers of the Himalayas as trans-modern trans-formation of the stratigraphy of a geological Last Glacial. And what about the new continent made of waste floating in the Pacific as a transformation of the old concept of geology? Plastic packaging in the stomachs of dead fish, dead whales and dead seabirds as a transformation of our old bonds and (supposed) symbiotic relationship with animals. Billion shipping pallets and millions of containers in constant motion are a picture story about the eschatology of transformation and the transformation of a site into a “non-site” a land into “non-land”.

"Globalization engenders displacement. People are displaced, objects are displaced, language is displaced. In a global circulatory system, there is no time — and certainly not enough energy — for tracing the long supply chains that lead to understanding" Kenneth Goldsmith (Displacement is the new translation)

At the dawn of the “Human Age”, Donna Haraway speaks about the need for change, about a new symbiosis of human and non-human. Neoforms – transformations, assemblages, transmutations and metastases – are in this age the consequence and the cause of the interplay and competition between nature, technology and man; a displacement of the boundary between the artificial and the natural, between language and what language describes. Apparently, man-made “hyperobjects” have already penetrated the molecular structure of our environment. Haraway claims that we should swiftly relearn the art of naming and acclimatizing ourselves, to reinvent the art of adaptation. Forcing nature to adjust to our long already “unnatural” standards, ideas and needs, is hazardous not only for us, but also for trees, animals, the weather, the oceans, probably the entire biosphere. Maybe only geological structures, the minerals, stones, sand, boulders and rocks, need not fear the future of the Age of Humans.

"The eruption and its aftereffects inspired Tennyson to depict a turning point in Western history and Shiel to imagine a harrowing future of human history’s end. Shiel’s protagonist laments, “nothing could be more appallingly insecure than living on a planet”. Krakatoa’s catastrophic eruption and its worldwide effects demonstrated the precariousness, and the interconnectedness, of life on earth."