A Walk Through the Héraðsflói Estuary

On this 10km walk we looked at the two rivers that have been affected by the construction of Kárahnjúkar dam. Driving first to Húsey, a remote farm in the Héraðsflói estuary, we followed Jökulsá á Dal, the dammed river that is now for most of the year fed by rainwater instead of glacial water. Further in the south, the other river, Lagarfljót, makes its own way through the estuary. Its waters have turned greyish-brown from increased glacial sediments, because Jökulsá á Dal's glacial waters have not only been stopped by the hydroelectric project's reservoir but have also been redirected through tunnels into the powerstation and from there into Lagarfljót river. The redirection of one river into the other has caused the aquatic life and diversity in Lagarfljót to decrease dramatically.
From Húsey we walked towards the coastline as far as we could go, looking for the place at which both modified rivers flow together before entering the sea. The difference in their water colour is profound and clearly visible. 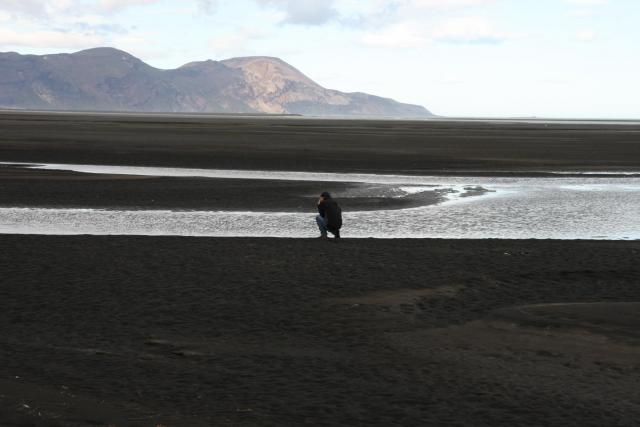